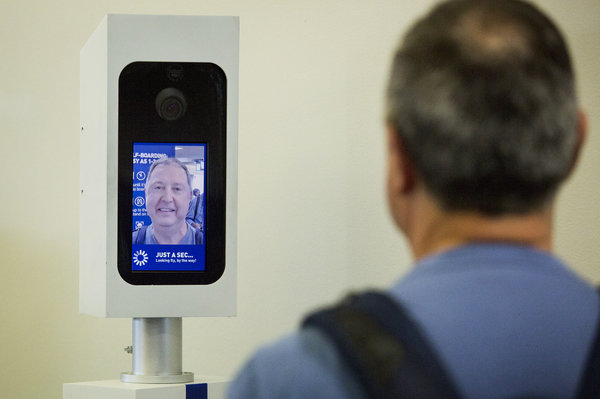 The US immigration system was originally designed to track who comes into the country, not who leaves. For more than two decades, authorities have been trying to find an effective way to keep tabs on departing foreigners—and those who overstay their visas.

Called Biometric Exit, the project would use facial matching systems to identify every visa holder as they leave the country. Passengers would have their photos taken immediately before boarding, to be matched with the passport photos provided with the visa application, or valid state driver’s licenses issued by our state governments. If there’s no match in the system, it could be evidence that the visitor entered the country illegally.

US Customs and Border Protection’s Larry Panetta, who took over the airport portion of the project in February, explained the advantages of facial recognition at the Border Security Expo last week. “Facial recognition is the path forward we’re working on,” Panetta said at the conference. “We currently have everyone’s photo, collated from multiple sources, so we don’t need to do any sort of enrollment.

We have access to the Department of State records so we have photos of US Citizens, we have visa photos, we have photos of people when they cross into the US and their biometrics are captured into [DHS biometric database] IDENT. And all of our fifty states regularly update our files with new photos that they collect”.

The Department of Homeland Security says it expects to use facial recognition technology on 97 percent of departing passengers within the next four years. The system, which involves photographing passengers before they board their flight, first started rolling out in 2017, and was operational in 15 US airports as of the end of 2018.

The system, tested on more than 15,000 flights, identified 7,000 travelers who overstayed visas, according to the agency. CBP calculates that 666,582 passengers who arrived by plane or boat overstayed visas in fiscal 2018.

Critics argue that building up a database of millions of people’s photographs is a threat to civil liberties. Once you have the database, it would be easy to share it with other agencies, effectively turning it into a search tool for all law enforcement.

Making that system work will mean building a robust system for checking passengers’ faces against outside datasets — but as that system is shared with more agencies, it may be used for far more than simply verifying departures, with serious implications for anyone setting foot in an airport. Speaking at the conference, Panetta said the same technology could be shared with land borders, as well as partners in the TSA, private airlines, retailers, and contracted traffic camera operators.

“We’re essentially building an IT backbone, which can allow TSA or potentially air carriers or any other partner to tie into our backbone,” Panetta said. “So once we completely build our exit infrastructure, we could potentially offer it to TSA if they want to use our facial matching or security screening test — or maybe if an airline wanted to use facial matching for access to their lounge. So we’re trying to be collaborative with our various stakeholders and our sister agencies such as TSA, and we’ll make that available to them when we have it.”

“Right now, other than the no-fly list, you do not have law enforcement checks on who can fly,” says Alvaro Bedoya, who studies facial recognition at Georgetown Law’s Center on Privacy & Technology. “But once you take that high-quality photograph, why not run it against the FBI database? Why not run it against state databases of people with outstanding warrants? Suddenly you’re moving from this world in which you’re just verifying identity to another world where the act of flying is cause for a law enforcement search.”