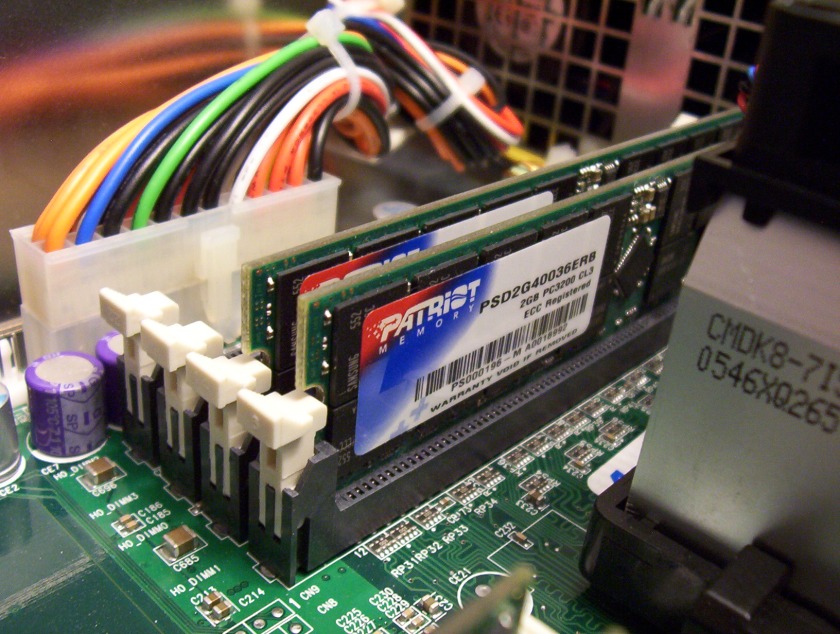 Random Access Memory, more commonly known as RAM, is the memory system within your computer. That’s where the bulk of the work your computer does takes place before moving it to your storage drive (HDD or SSD). Advanced graphics cards may also carry an additional amount of RAM, but that is reserved for use with graphics heavy applications.

The basic commentary is that if you need more speed from your computer, the best – and sometimes only – way to achieve this is with increasing your system’s amount of RAM.

If you started with a Windows 7 or 8 computer and took advantage of the free upgrades to Windows 10 over the past few years, your computer may only have 2GB or 4GB of original RAM. There are, however, some early Windows 7 computers that came with only 1 GB RAM and were upgraded to Windows 10.

Or if you are currently running a Windows 7 computer and are considering upgrading to Windows 10 before support for Windows 7 runs out at the end of this year, then you should definitely upgrade your RAM as well.

If you plan to buy a fresh, new Windows 10 computer, then make note of the comments below. You’ll want to make sure you are getting a comfortable amount of RAM installed when you buy it.

So, what is the proper amount of RAM you should have?

1GB of RAM is the minimum system requirement for the 32-bit version of Windows 10, and while Windows claims it’s possible for this to work, it’s not going to work very well.

And even these basic tasks are going to be painful. Do yourself a favor and avoid 1GB of RAM if you can.

2GB of RAM is the minimum system requirement for the 64-bit version of Windows 10. You might get away with less, but the chances are that it’s going to keep you frustrated with the snail-pace it will have.

With 2GB you should be able to do pretty much everything with your computer that a computer is capable of doing, such as photo editing, running basic suites like Microsoft Office, and having more than one or two browser tabs open. Sure, the shortage of RAM is going to keep your system slow, but 2GB is enough to at least do the basic tasks a computer should be capable of doing.

2GB is also enough to run more serious apps, but to be honest, if you’re paying money for serious software, you should be able to afford more RAM!

The bottom line is that if you’ve got a system with 2GB of RAM and it feels slow, add more RAM.

If you can’t add more RAM, then nothing else you do will speed it up.

The difference in performance between a system with 2GB of RAM and one with 4GB is like night and day. Even on a 32-bit system that limits the RAM to a little over 3GB, the performance boost is well worth the cost. Not only do applications run faster, but you can also run more applications simultaneously, which comes in handy if you run suites like Microsoft Office and an web browser at the same time.

If you have a 64-bit operating system, then bumping the RAM up to 4GB is a no-brainer, you should do it without question.

All but the cheapest and most basic of Windows 10 systems will come with 4GB of RAM.

Now we’re into performance territory. If you’re serious about your PC, then I consider this to be the absolute minimum. If you’re buying or building a machine and you know you’ll be needing to do photo or video editing, or just want a fast system, then 8GB of RAM is the minimum you should consider to avoid frustration.

This is the amount of RAM recommended by Adobe for users running Creative Cloud applications.

8GB of RAM is not expensive. You can get the OEM builder to fit it into a new system and you’re likely paying a premium. But if you have a custom builder or order from a third party aftermarket supplier like Crucial, Patriot or Kingston, this can be had for under $40.

Note: You will need a 64-bit operating system to make use of this amount of RAM.

Is there a case for more than 8GB of RAM? Sure there is, but this is where you reach the limit of what an ordinary computer user needs.

The time when more than 8GB of RAM becomes useful and starts paying for itself is when you’re running several resource-heavy applications simultaneously — especially image or video processing, multiple web browsers, or multiple components of an Office Suite. Try running Premiere Pro, Photoshop, and simple games side-by-side on a system with 8GB of RAM, then bump that up and feel the difference.

Note: You will need a 64-bit operating system to make use of this amount of RAM.

You’re now deep in the realm of heavy lifting. A workstation with more than 16GB of RAM will be a do-anything system. This is the sort of system that will be able to run multiple resource-heavy applications or virtual machines simultaneously.

I edit 4K Go-Pro videos for a client and it wouldn’t be possible if I was using anything less than 32GB RAM. So yes, there are instances where a large amount of RAM is called for.

It’s worth noting that 64-bit Windows 10 Pro, Enterprise, and Education will support up to 2TB of RAM (if the motherboard and processor can handle it). But outside of heavy-use government research facilities, I can’t imagine the need for that much RAM.

Bear in mind that how much RAM your system supports, along with the type and speed, will depend on your motherboard. Consult your PC/motherboard manual, or, if your PC was manufactured by an OEM, use a system checker such as the one found on Crucial.com to find out what RAM is compatible with your system.